True leadership is not about being a part of an organization or becoming involved with the status quo. Patti Von Niessen​ is a true inspiration and a much needed visionary in bringing quality events to the Columbus Westside Hilltop. She accomplished this without affiliation but rather taking her vision in bringing art to our community. In doing so she brought people from all cultures together, to mingle, eat, enjoy art, enjoy music, and make new friends. She has accomplished more in bringing people together with a solid theme of activities, events, and learning in the past 4 years than any organization here on the Columbus Westside Hilltop has attempted to do in the past 25 years. This in my opinion makes for a true leader, an inspiration for us all!

Laughter rises from the mingling crowd, mixing with music booming across Westgate Park and the smoke from the eclectic array of food trucks. For an afternoon, all is right on the Hilltop.
The fourth annual Summer Jam West arts and culture festival kicked off early Saturday afternoon, bringing in a diverse group of community members, artists and vendors. From a children’s face-painting tent and a local ice cream shop to a broad display of area bands, the festival hosted a bevy of Columbus offerings.
The festival is an attempt to break down the formal cultural and physical distance that make Downtown galleries often inaccessible to Hilltop residents, said Patti Von Niessen, the executive director of the Summer Jam West nonprofit.
“Being able to have art brought to them is huge,” Von Niessen said. “We’re an art desert out here. There’s virtually no public art.”
This year’s theme is “Moving and Grooving,” and, per tradition, a huge mural was painted to commemorate it. Local artist Roger Williams donated his time and talents to complete the massive 95-foot-long painting along the nearby Camp Chase Trail. Murals from years past can be found dotting Westgate Park.
Von Niessen has been a neighborhood resident since 2009, and began the organization in 2012. What started as a modest 1,000-attendee festival has blossomed to attract an estimated 6,000 this year, taking up most of Westgate Park’s 43 acres.
Brian Marcus, Hilltop resident and local artist, has witnessed the growth and positive effects of the festival over the years. His hand-drawn, psychedelic artwork decorated his vendor’s tent, which he said was meant to help showcase the creativity of the community rather than turn a profit.
Marcus was commissioned by Von Niessen’s organization to paint a panel that was awarded to a local business for quality work in the community. Such initiatives aren’t uncommon for Summer Jam West, which Von Niessen said tries to proliferate permanent art installations throughout the neighborhood.
“We keep as much of our money on the Hilltop as possible,” she said. “We try and live up to our socialist attitude, you know?”

Her hyperlocal commitment is recognized by a wide coalition of sponsors from across Columbus. The $30,000 festival is made possible by donations from Heartland Bank, Greater Columbus Arts Council, Ohio Arts Council, Hollywood Casino and Puffin Foundation West, to name a few.
Summer Jam West is a welcome change of pace for community members and local police officers alike.
Horse-mounted and K-9 officers watched as children played with the animals, a cruiser was open for kids to inspect and take photographs, and patrol officers roamed the park grounds with ice cream or fried chicken in their hands.
Brian Newsome, a community liaison officer for the Hilltop precinct, has worked at the festival for the past several years. He’s noticed the benefits brought on by the artistic initiatives of Summer Jam West.
The event, which he said has remained peaceful in years past, helps to revitalize and bond the neighborhood.
“Just trying to bring back that neighborhood feel of community, to know your neighbor,” Newsome said. “I just think all around, it makes it more of a community event.”
akeiper@dispatch.com
@keiperjourno 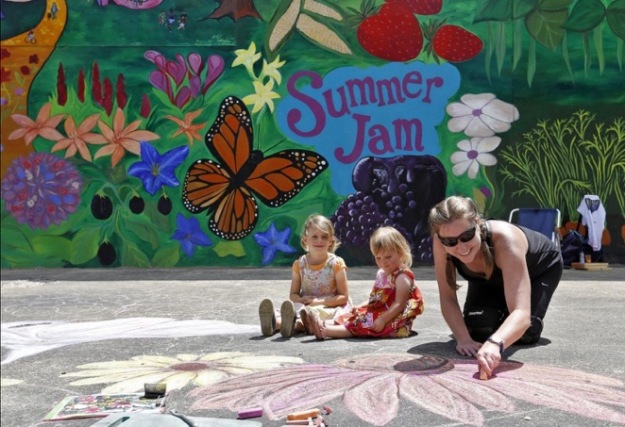