Radicalized, ISIS inspired, disgruntled, prejudiced against, it doesn’t matter and who cares. Police did just cause by taking down a person with intent/success to harm others.

We are no longer in a realm where we can sit down and psycho analyze whether a person who is demonstrating intent to harm others is going to follow thru or not.

The person is dead and I have no desire to listen to endless discussions as to the conditions that lead that person to do what he did. Do I sound cold and un-empathetic? Perhaps, all I know is that I stand behind the police officer’s actions as just and quick acting appropriate to the situation. 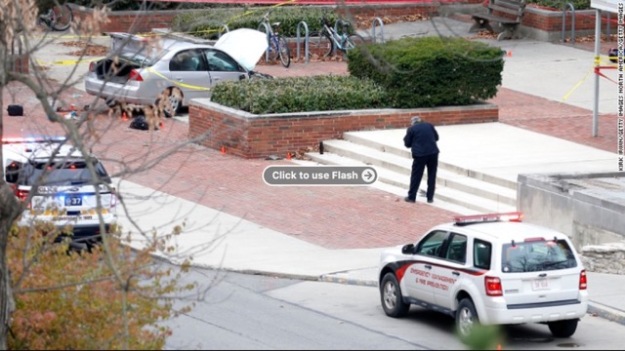 In response to letter to the editor (see below):

I’ve said for three years now that the Hilltop is the no man’s land between 70W/W. Broad St and Wilson Rd. It’s even an embarrassment going west of Wilson Rd with the new sidewalks, lighting, and streets and the wonderful median strip that was beautifully filled with weeds this year. But let’s go further west on W. Broad St and see the wonderful developments going on in Lincoln Village. Their median strip was beautifully kept with sustainable plants that made a pleasure to go thru Lincoln Village. So why has the Hilltop failed and Franklinton and Lincoln Village have succeeded? Perhaps we are a lost cause. Perhaps we are the dumping ground of Section 8 vouchers from other areas of the city that had to move those populations out in order to revitalize. Perhaps we have land development banks that claim to be doing us good and patronize our community but really they are sectioning “poor” dollars to our neighborhoods in developments so that they can take the higher end dollars to better neighborhoods. Perhaps we are the new “project” place to be for homeless shelters, free medical facilities, and mental institutions after all that’s the people we have. Perhaps we are the famous place for out-of-state LLCs to buy up all our housing dirt cheap and then renting these properties unfixed, broken to people desperate for housing that will pay the high rent prices because they don’t qualify for other housing. And of course let’s thank and kiss the asses of our great Columbus City officials who walked our streets and talked the talk but still shy away from any tough stance on slumlords, tougher regulations from LLC’s buying up property, especially from out-of-state, and setting up slum housing right next to Hilltop residents who still give a damn but are damned for trying to get the city to do something. Let’s not even get into our new claim to fame of being the heroin place to be for the City of Columbus. Let’s continue to allow the city to dump clean needles and naloxone which we all get to view daily discarded in our alleys and sidewalks. Let’s continue to thank the City of Columbus for continually setting loose habitual drug sellers so that they continue to come back to our communities and continue our fame. Let’s continue to thank the city for turning a deaf ear on reported call-ins of known drug houses in our communities because resources can only be devoted to the “big gamers” while our small time drug dealers flourish on our streets and laugh and boldly sell in our streets because they know they are untouchable – they know the game. And finally let’s not begrudge the Hilltoppers that moved here and tried to do their best to make a better community but realize they are only one against many and are leaving in defeat because they only want a safe, clean, and sustainable, vibrant place to live.
================================
Letter to the Editor: City is turning its back on Hilltop
Saturday November 26, 2016 5:00 AM

In his 2016 State of the City address, Mayor Andrew J. Ginther stated, “We know there are other neighborhoods that could benefit from more city investment.” He then outlined plans for the Hilltop and Linden neighborhoods (Dispatch article, Feb. 25). However, it seems Ginther has quickly abandoned the Hilltop.
Since Ginther took office, Linden has emerged as the ostensible favorite child, with promised inclusion in the Smart City transportation program, offices for the new Department of Neighborhoods, and tax incentives for a new Huntington headquarters (“Huntington investing in Northland, Linden,” Dispatch article, Wednesday).
On the Hilltop, it is more of the same neglect: The city approved a tax credit to a major employer, Big Lots, to move offices out of the area (“Big Lots gets city tax break,” Dispatch article, July 19), and COTA is actually cutting bus service on some lines after voters in November renewed a sales tax for the transit system. The current administration takes credit for Hague Avenue improvements and sidewalk and sewer improvements, but these long-overdue Hilltop improvements were already set to be made under the administration of Mayor Michael B. Coleman.
Watching the promised investment go to Ginther’s pet project and not balancing the investment between the two neighborhoods is yet another signal to the West Side that City Hall is leaving the Hilltop further and further behind. How disappointing.
Ruth Thurgood Mundy
Columbus

I have no problem with two consenting adults in having sex, regardless if young or not as when the urge is there hormones will prevail. But when has it become a fact of course that Momma “don’t know who baby Daddy is” and “that baby ain’t mine”? Is it a result of parents too afraid to have that discussion with their children and allowing access for contraception? And then we see all the daytime talk shows providing DNA testing and elaborate calendars showing conception date and due date – I’m sure we all know the time frame from conception date and due date; seems really the issue is that someone ought to be marking on their smart phone calendar the date and time that Joe spread Momma-to-be’s legs.

Very well said. I’ve seen my friends count on FaceBook drop by almost 10 because of my outspokenness on this, not that that matters to me but I’ve made some pretty countering statements on other subjects in the past. The fight is not about protesting because of a choice of President but rather holding our new President to be accountable and fair to all the citizens of our country. Rioting, destruction of property, or promoting of hate is not an acceptable way to express one’s fear or not accepting or concern as to what our country has in store for us. Instead turn that fear into constructive energy and make positive change and growth instead of hate and tearing down. And please don’t think your actions of racism and prejudice gives you acceptable license because our new President to be got away with it. Trust me he will be held accountable severely if any of these actions should occur going forward. 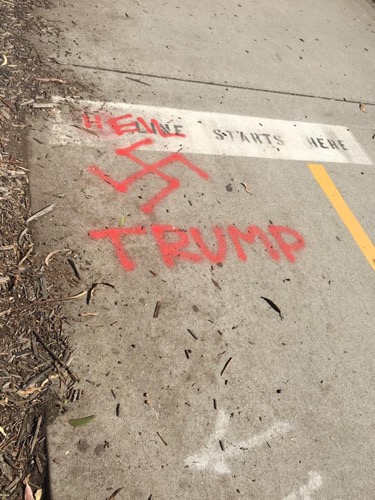 It is so sad the number of friends that have unfriended me on FaceBook over my recent posts, especially one’s identifying as gay. I’m actually quite embarrassed for them as in years past this same group of people were harassed, beaten up, hated on, denied employment opportunities, or disowned by families, or lost their lives. It’s also ironic that these same tend to be younger and have had the privilege to express and be themselves throughout their lives as a result of the generations that fought for their right to be who they are today. It saddens me that they use the same words of hate, hurt and such to a Presidential elect (one who myself I did not vote for) or towards the voters that elected him. They use these words based on assumptions or prior actions instead of seeing exactly what our new President elect will do. We are a democratic society with systems in place that protect our current laws, laws put IN MOTION by prior Presidents because people came up and spoke and educated the President that this was the thing to do. It embarrasses me that as a gay person who has always believed in acceptance, tolerance, understanding, “to be who I be” that I have to see these hateful activities going on today all based on an assumption of what if, instead of believing in our great American Democratic Society that we will continue to move on towards a great nation that embraces all it’s people. Sure we can jest, pass humor, state our beliefs but we sure don’t need to be rioting (and let me point out that the rioting today over a Presidential elect is in no way equitable to the Stonewall riots decades ago), spreading hate, or fighting within the same group that share these core beliefs. I’d rather see unity; and practice what we all have fought our lives for and that is acceptance and to be loved for who we are. We all have done this in our own ways whether large or small. We have the power of knowledge, education, and cultural history. We sure do not need to embarrass ourselves and succumb to the same haters that have ridiculed and suppressed us. Continue on with the local LGBT (LGBTQA) groups and participate in their upcoming endeavors but please let us not go backwards and undo their efforts. Acceptance in part is assimilation, strength though is proudly being who you are and this cannot be taken away by any President. And if our President elect attempts to, it will be just that, an attempt because we are a powerful force not to be reckoned with. Let’s focus our energies in preparing for that, if the time comes, instead of passing hate or contributing to activities that have no outcome; participate instead in activities that will. It’s our future and us “olderlings” are relying on a smart youth that need not go astray on inconsequential embarrassing matters. Remember, it has been stated that we are a group of the world’s most influential people. So let’s not embarrass ourselves: “Fight smart not aimless.”

And let’s not forget: A democracy by definition is government through elected representatives. A healthy civil society requires responsible and active citizens who value the system of government and work towards a shared vision of civil life. 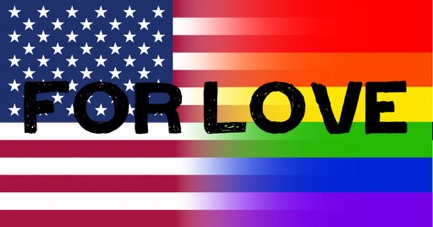 I was so proud to vote today. Why? Because I saw people from all walks of life. I saw Muslims, Somalis, Mexicans, South Americans, all skin colors, all faiths, in wheel-chairs; I saw first time voters, elderly voters, immigrants, people dressed in suits, shorts, flip flops; all patiently waiting in line to vote. No fighting, no screaming, no pushing; just proud Americans choosing and using their right to vote. I cannot lie, I had watery eyes with emotion and strengthens the fact that I am proud to be an American no matter what issues of race, culture, economic means, sexual identity, religious background, crime, drugs, and terrorism that we are faced with every day. If I could have filmed my wait in line I would have because this is what being and American is about. Please vote and feel the pride and experience. I could care less who you vote for, I do care that you vote. Please do!

Four separate Amendments – the 15th, 19th, 24th, and 26th – even use the same powerful language to protect it: “The right of citizens of the United States to vote shall not be denied or abridged . . . .” Of course, like every other constitutional right, the right to vote is subject to reasonable restrictions. Nevertheless, it’s just as much a constitutional right as any other embodied in our Constitution.

Sadly a people that don’t have choices between corrupt or non-corrupt because all politicians are corrupt and the one’s that truly are not corrupt, I assure you, you’ve never heard of them! So we are not really accomplices but rather just trying to decide which is better a gun or a knife! 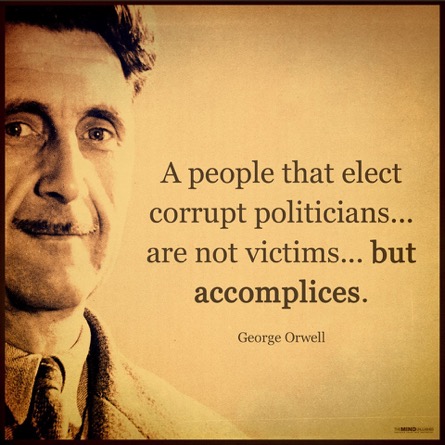