There are many things we are not required to do including not putting a flag out for American Holidays. We do these things though by choice, patronage, respect, citizenship, and solidarity for our country! After all that is why we are a democracy and not North Korea. Heck I even remember my citizenship badge in the Boy Scouts! It would come to think though that we would teach the value of patronage and why we should be thankful to be an American in our schools and thankful for the quality of life we have because we are Americans. Showing respect is just a way of being thankful, respect a value of which ideally should be taught at home but then that is another topic!

School board chair calls Trump ‘bonafide idiot,’ tells students they don’t have to stand for pledge
Nov 22, 2017 11:31 am

“A Democratic school board chairman in Virginia is drawing attention after he called Republican President Donald Trump a “bonafide [sic] idiot” and made it clear that students and employees are free to not stand for the national anthem and Pledge of Allegiance.” 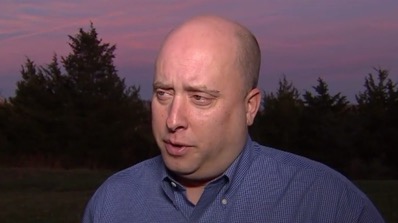 What a waste of taxpayers money! Shame on Columbus City Council! As if a drug user is going to be so conscientious (as in conscious) to take the time and walk to one of these boxes! It’s classic enabling and not solving the problem. Again a “feel good” band-aid that our city officials thought would solve our drug problem.

And don’t say it’s just a metal box. Look at this picture: the box is new, has a lock on it, was set on a poured concrete foundation, and oh yes, we have to pay someone to empty it! Total waste of money that I would have rather seen going into the real issue of shutting down the drug dealers infesting our streets!

It baffles me the thoughts people have especially homeowners who think that if they just dump their furniture, construction debris, and other large items to the alley or just outside their alley facing fence that it magically disappears.

I’ve had many a challenge addressing such an issue with properties whether owned or rented who state:
“Well I don’t have a gate, or my gate is blocked or doesn’t work so I can’t get around to the alley so I just don’t pay attention!”

Or,
When addressing a property owner that rents out: “It’s not my problem how my tenants get rid of their trash, you take care of it.”

Or,
When you confront the people at 11:00 PM at night that were hired by the property owner that rents out to set out the belongings of an eviction and dumps in the 300 gallon trash containers to overflowing and then continues dumping beside it or just sets it right in the alley blocking the alley: “Well I was just paid to do this by the property owner, here is his number” and you call the property owner and he asks if you are the f*cking mayor and then tells you to f*ck off and mind your own d*mn business.

Or,
You try to get neighbors to realize that yard waste has it’s own disposal mechanism and that just dumping those large tree branches and bushes and other yard waste just outside their alley facing fence or next to the 300 gallon trash receptacles that it magically disappears.

Or,
You go out to find that someone’s construction project debris has totally filled the 300 gallon trash receptacle and that it is so full that the trash truck cannot even lift it to dump it.

Or,
As a concerned citizen you at least try to do something with the discarded mattresses laying up against the 300 gallon trash receptacles that are blocking any further access to the containers and you want to try and move it away but then you notice the clear signs of bedbugs and have to leave it.

Or,
You try to at least turn those discarded older glass TV’s face down because you know within hours they will be kicked in and then you are faced with glass all over the alley.

As a daily routine you have to check the alley from your garage access to the nearest road access for any glass bottles or broken glass because you don’t want to drive over it with your car risking a flat (which by the way I have to take insurance on those expensive tires and have to use it at least 3 times a year).

Yes, fun times to be living in a city that prides itself in being so community minded but yet can’t address this issue which in a lot of ways is the city’s fault because they just pick it up and don’t address the issue!

COLUMBUS, Ohio (WSYX/WTTE) — Fed up with trash and dumping issues, people are turning to social media sites to shine light on neighborhood issues.

One community page on Facebook is dedicated to informing followers to the blight issues in the city.
Trash and dumping issues, such as tires, mattresses, furniture and more, have plagued several Columbus communities for years in areas like south Columbus and the Hilltop.
“It makes me angry. It really does. It makes me angry because this is our neighborhood,” said Bill Huffman.
Huffman belongs to community group “Friends of the Hilltop.” He said exposing these community problems through social media will get the attention of city leaders.

“The city sees Facebook too. Don’t think their personnel who work for them are not on Facebook and the mayor doesn’t hear about these issues out here because he does,” said Huffman.

The longtime Hilltop resident said in addition to getting action from city leaders, ordinary residents are also needed to address the problem.

Jeez, I truly detest ANYONE that takes fentanyl or sells it. You are the lowest of low lifes and I truly have no empathy for your addiction problem or economic situation – rot in hell!

LEACHVILLE, AR (WFLA) — Police are advising shoppers to take a simple extra step that could save your life.
The next time you’re hauling a cart around the store, be sure to wipe down the handles first.
One police department is recommending this to the public, but it’s not because of germs reason we’re all thinking.
They say if you skip using a wipe, that can usually be found at the front of most stores, it could be deadly.
The department said drugs such as fentanyl or a similar substance can enter into your system from contact with your hands.
Exposure to fentanyl can be extremely dangerous, especially for children. In September a 12-year-old  Columbus boy died after coming into contact with the drug.

The advice comes from the Leachville Police Department’s Facebook page.
Below is the full post from the LPD:

Chris Hoyt, a professor of emergency medicine at the University of Colorado hospital to KUSA that while one milligram of fentanyl in its powder form is enough to cause an overdose, the chances of a person coming in contact with the drug in a space like a grocery store are very slim.
“If you just happen to walk by them, it’s very, very, very unlikely that you’re going to get sick that way,” Hoyt said.
Lt. Scott Reed from the Multi-County Narcotics and Violent Crimes Unit tells WKYC, if someone had enough fentanyl in their system to the point where it would transfer from their skin, they would probably be unconscious or dead. Reed says they would probably be too high to get out of their car, grab a cart, and go shopping.

Grab a wipe and at least stay healthy.