A bystander’s perception of actions occurring may be perceived as hostile but that bystander doesn’t know the rules and protocols that a police officer has to follow. We put our faith in our police officers to be doing their job with integrity and objectivity. Additionally and of course the story doesn’t go into how all this started and the images captured are of course from the bystanders perceptive so what do we really know? When we continually assume bad faith from our police officers to defend our communities, what do we have left? – Anarchy? And who do we have to blame for anarchy, the citizens or the police? 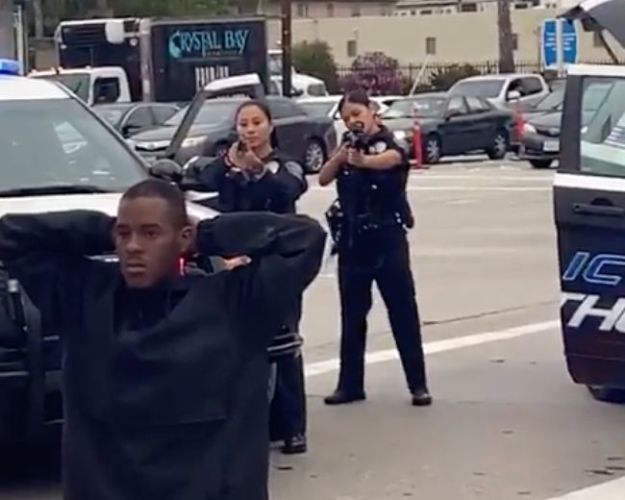 The woman in Hawthorne, California, begged officers to put their guns down as they pointed it at a black man who was kneeling with his hands above his head.

A woman in the Los Angeles area is being praised for filming police as they confronted a black man with their guns drawn while he knelt with his hands above his head.

In the video, filmed Friday in the city of Hawthorne, at least four officers can be seen pointing their guns at the man, who is kneeling on the sidewalk, facing away from the officers with his hands up.

More Hawthorne Police Department officers arrive as the woman, Sky Holsey, begs the officers to put their guns away. The man can be heard saying he is unarmed.

Holsey’s video went viral over the weekend, leaving many people outraged over the number of police officers with their guns drawn. Some people credit Holsey with preventing the officers from using deadly force against Ewell.

Holsey told HuffPost in an email that she was getting gas before work when the confrontation occurred. She said Ewell, whom she doesn’t know personally, “instantly” surrendered to the officers by kneeling with his hands up, noting that “he seemed in shock.”

Holsey said she began filming because she believed that the police were using excessive force.

“Is all that really necessary,” Holsey can be heard telling the officers in the video. “Is all the guns drawn on him necessary?”

He was arrested in connection with an argument with a gas station employee over a prior purchase, according to a news release posted by police on Monday. Police arrested Ewell on suspicion of robbery. He was released Monday with a citation, according to an arrest record.

Asked whether the actions of the officers were justified, Holsey told HuffPost: “Absolutely not.”

“Everybody seems to ‘fit the description,’” she said. “Plus, I thought it was too excessive for that many police and the guns drawn like that.”

As Holsey filmed the confrontation Friday, she warned Ewell to stay still “because they will shoot you” while she asked the officers to put their guns down and just arrest the man.

Holsey began crying as the officers kept their guns aimed at Ewell, as seen on her video. She later told the officers that her boyfriend, Leroy Browning, was killed by police in 2015.

After more than two minutes of filming, the police apprehended Ewell. One officer approached Holsey and told her that they were responding to a robbery and that the man “loosely matches the description” of the suspect.

“We’re not saying he’s a suspect, but we’ve got to figure out what’s going on,” the officer told her, a moment that was also captured on her video. “It says a weapon was involved. That’s the only reason he gets held at gunpoint.”

In a series of tweets, Rebecca Kavanagh, an attorney and media relations director of The Appeal, a criminal reform news blog, said that Holsey was “remarkable” for filming the incident, which she described as a “massive over-use of force.”

On Monday, Kavanagh said that police often justify arrests by claiming that the person “matched the description.”

“This is absolutely the number one pretext police use to stop and search Black and Brown people,” she tweeted.

Kavanagh described those searches as “harassment” on Sunday.

In a news release on Sunday, the Hawthorne Police Department said that an employee of a gas station flagged police on the street and pointed to a “male subject” across the street, accusing him of assaulting an employee.

At the same time, police say, someone called 911 to report a robbery with “possibly weapons involved.”

Police accused Ewell of arguing with a female cashier over a “prior purchase” and “forcibly” grabbing “store items from the display.” Police also claimed that Ewell assaulted an employee with a trashcan.