It upsets me to read on social media the people that are upset because people on their feed did not vote for the candidate they did and therefore deem it acceptable and appropriate to remove them. It upsets me the closed mindedness of people that act this way as it demonstrates the same bias that they feel they saw in the candidate they didn’t vote for. I have worked and interacted with many a person that had differing views as I on many things but we both worked together to accomplish our goal. After all the true act of accepting of others is learning to interact together regardless of each other’s differences. Respect begets respect and at the end of the day has nothing to do with who you voted for. 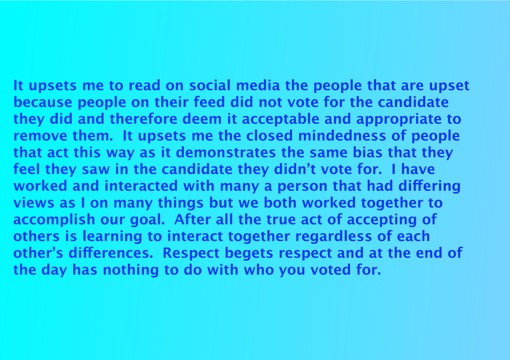